In September of 2019, Disney’s Skyliner opened up. It created an entirely new magical way to get from select resorts and theme parks. Also known as the Disney gondola system, let’s take a look at the Disney Skyliner map and discuss everything there is to know!

Knowing how to travel between the parks and resorts is important to any visitor to Walt Disney World. Between all of the different types of transportation at Disney World, it can be difficult and confusing to choose the best way to travel. That is even more true for newer modes of transportation, such as the Disney Skyliner, that not a lot of people have experience with.

Veterans of Disney World may remember the Skyway, a gondola lift ride at Disneyland, and the Magic Kingdom, which closed over 20 years ago!  In 2019 Disney brought the memory of the Skyway back as a new convenient way to travel between some of the parks and resorts called the Disney Skyliner.

What does the Disney Skyliner Cost?

If you are trying to do Disney on a budget, it is important to know the cost of everything before you go. Luckily for you, the Disney Skyliner is free transportation for any guest visiting Walt Disney World just like the other buses, boats, and monorails around the parks!

This is the same whether or not you are staying at a Disney resort property, making it even more convenient for people doing Disney on a budget.

If you want other tips on visiting Disney World on a budget, check out these 50 tips for Doing Disney on a Budget!

Which Disney Parks have the Skyliner?

Later, will discuss the various resorts and routes the Skyliners takes but let’s start with the parks that have Disney Skyliner stops.

Epcot is on the Skyliner route. It leaves you at the back entrance, which usually has less traffic than the front.

Disney’s Hollywood Studios is also part of the Disney Skyliner route. It lets you off near the bus station which is in front of the park.

The Skyliner changes the game for park hopping. You can now get to Epcot from Hollywood Studios in less than half the time. And in addition, you can go from Epcot to Magic Kingdom using the monorail system. This removes the need to get on a Disney bus!

How many people fit in a Disney Skyliner?

The standard Disney Skyliner gondola has the capacity to accommodate 10 guests riding in it at a time. While this might not seem like a lot compared to some of the other transportation methods in the parks, they have around 300 gondolas running along the Skyliner route, which lets them transport almost 4,500 guests per hour!

What about wheelchairs or ECVs on the Disney Skyliner?

There are special gondolas that are designed to accommodate wheelchairs and ECVs. These Disney Skyliner gondolas are able to fit 6 guests.

Strollers on the Disney Skyliner

Of course, you are allowed to bring a stroller with you on the Disney Skyliner. However, it must fit within the size requirements set by the parks (generally 31 inches wide by 52 inches long).

If you have a stroller that is on the larger side,  you may be asked to fold it before boarding the gondola. This is almost always the case if you have a double stroller, even if it is a smaller size. B

ringing a stroller on the Disney Skyliner may also reduce the capacity of the gondola from 10 guests to 6, so keep that in mind if you are traveling in a large group.

Here is the Disney gondola map. 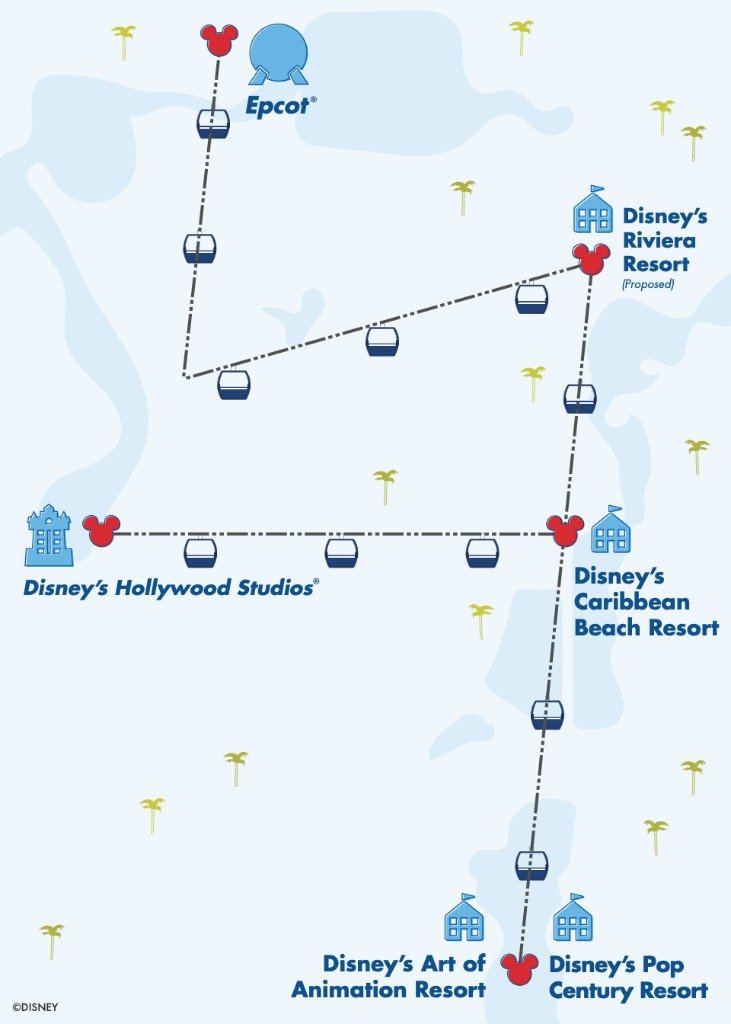 How fast is the Disney Skyliner?

The Disney Skyliner is a relatively fast way to travel between the resorts and the parks.

They will travel nearly 11 mph at their top speed and will slow down to 1 mph when they arrive at a station.

The Disney Skyliner never fully stops to keep things moving quickly for everyone riding. Cast Members are able to slow down the Skyliner even further than 1 mph to accommodate guests that need more time to get on or off of the gondola.

If you are someone who might need extra time to get on the gondola, be sure to let the Cast Member in charge know so that they can make sure to slow it down for you.

How high is the Disney Skyliner?

The Skyliner system reaches a maximum height of about 60 feet off the ground. While this is not nearly as high as the Tower of Terror or Expedition Everest, it might still be uncomfortable for people afraid of heights.

Is there AC or Heat on the Disney Skyliners?

There is no AC or heat on the Disney Skyliners, but there are air vents designed to allow good airflow from the air outside. Florida is known for its hot temperatures, but the speed and height of the Skyliner combined with the air vents usually make it a comfortable ride.

Which Disney Resorts Will Have The Skyliner?

As you can see on the Disney Skyliner map above, the Skyliner has stations at four of the Disney Resorts.

Disney’s Caribbean Beach Resort has the largest station near the Jamaica area of the resort. Disney’s Art of Animation Resort and Disney’s Pop Century Resort share a station on the generation gap over hourglass lake. Finally, the new Disney Riviera Resort has a station.

Transferring on the Disney Skyliner

In order to make your Disney Skyliner journey smooth, it is important to know when you will need to get on and off the gondolas for transfers. This is especially true because the gondolas don’t come to a full stop when they reach a station and instead move slowly at about 1 mph.

There are two big things to remember to minimize confusion while riding the Skyliner. The first is that transferring usually happens at Disney’s Caribbean Beach Resort, as that is the main hub for the Disney Skyliner.

The second is that EPCOT and Disney’s Art of Animation/Disney’s Pop Century Resorts are the two ends of the Disney gondola map and always require getting off of the gondola when you reach the station.

Next, we will go a little more in-depth at what happens at each station on the Disney Skyliner map.

Leaving EPCOT, you will need to get off of the gondola at the Caribbean Beach Resort if you are going anywhere besides Disney’s Riviera Resort.

Arriving at Disney’s Art of Animation/Pop Century Resorts, you will need to get off of the gondola in the same way that you need to get off at EPCOT. This is the other end of the Skyliner map so will require getting back in line if you find yourself needing to continue your ride.

This is the main hub of the Skyliner, so it has the largest station and is where most transfers happen.

If you are leaving from the Caribbean Beach Resort, you can enjoy a non-stop ride to any of the other stations from here.

If you are leaving Riviera Resort, you do not need to transfer if you are going to EPCOT. All other destinations from Riviera Resort will require transferring to Disney’s Caribbean Beach Resort.

If you are leaving Hollywood Studios and are going to Art of Animation and Pop Century Resorts, you do not need to transfer gondolas.

If you are leaving Hollywood Studios and are going to EPCOT or Disney’s Riviera Resort, you will need to transfer to Disney’s Caribbean Beach Resort.

The Skyliner is similar to other forms of Disney transportation in that it will open 30-60 minutes before the park opens and close 1-1 1/2 hours after the park closes every day.

The official Disney Skyliner operating hours are not specified, so you’ll have to estimate when the parks will open on the day you want to use them. If the parks are scheduled to open at 9 a.m., the Disney Skyliner should be operational by 8:00 a.m. that day.

The Disney Skyliner’s schedule was changed last year to 6:45 am-10:30 pm to fit the new opening hours at Disney’s Hollywood Studios during the holiday season.

The Disney Skyliner is a great way to beat the crowds and get to the parks early(ish)!

However, a true rope drop means getting to the park 30 minutes before it opens, which means the Skyliner is not a good option because it will not get you there on time.

If you want to rope drop any of the parks, I recommend taking an Uber, Lyft, or Minnie Van.

The Best Times to Take the Disney Skyliner

The best time to take the Skyliner is first thing in the morning when the parks open or last thing at night when they close.

If you want to avoid the crowds, I recommend taking the Skyliner mid-day when people are in the parks and not thinking about transportation.

The Best Time to Avoid the Disney Skyliner

The worst time to take the Skyliner is during the middle of the day when everyone is in the parks and not thinking about transportation. The lines at the Skyliner stations get longer as the day goes on.

The exterior of the cabins features colorful artwork inspired by Disney films and attractions.

There are seven colors- Blue, Red, Green, Yellow, Orange, Purple, and Teal. And 22 different character gondolas to ride in.

Temperature Inside the Skyliner

Since the gondolas do not have AC but air cooling, it isn’t cold while you ride them.

Most reports state that the temperature inside the building is not exceeding the outside temperature.

How Long Are The Rides On Disney Skyliner?

The following times show how long a Disney Skyliner Ride can take starting from the main station at Disney’s Caribbean Beach Resort. All times are approximate and can vary depending on if you have to transfer to another gondola to get from one end of the line to another. 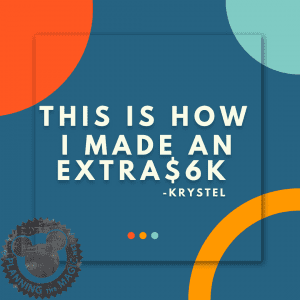